Inside the ABC is also equipped with Supervising Instrument Boiler in the form of recorder recording data - boiler operation data. The ABC system has functions for operation and thermal power plant control as follows:

Structure of the ABC system: 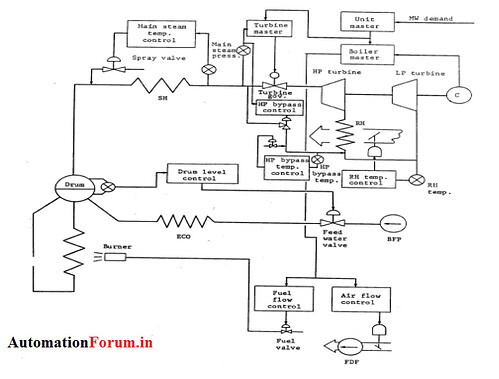 The ABC system is composed of a microprocessor with high reliability and maintenance levels. These tools or control modules are installed in 4 cabinet systems with a power supply. 2-wire electric transmitters and pneumatic actuators are used in this ABC system.

DCS microprocessors are provided for manual operations and auto / manual transfers. This control station is installed on the BTG Board at the CCR. For plant protection, limits are given such as cross limit, minimum fuel, pressure limit and safety interlock in system failure. The ABC system has a complete function for automatic plant operations with interfaces needed for ABS, EHC and other control systems.

Operations and monitoring of BTG units can be carried out through the Master Console Unit. This console is arranged at the BTG Board in the central control room.

2-wire electric transmitter is used for control measurements. The Oxygen analyzer from NGK is used to control O2 exhaust gas in the air flow control sub-loop.

Basically a hard wired connection is used on analog and digital input/output on the ABC system.