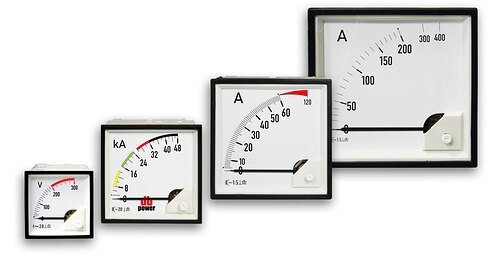 What is analog meter? Difference b/w analog and digital meter.

Analogue meters are used in industries because of low cost and simple and are often used instead of digital instruments. Eventhough digital instruments have the advantage of greater accuracy and much higher input impedance, analogue instruments suffer less from noise and isolation problems.

But analogue instrument have advantages of that they are passive instruments that do not need a power supply, this is often very useful in measurement applications where a suitable mains power supply is not readily available.

A moving-coil meter is a very commonly used form of analogue voltmeter because of its sensitivity, accuracy and linear scale, although it only responds to d.c. signals. 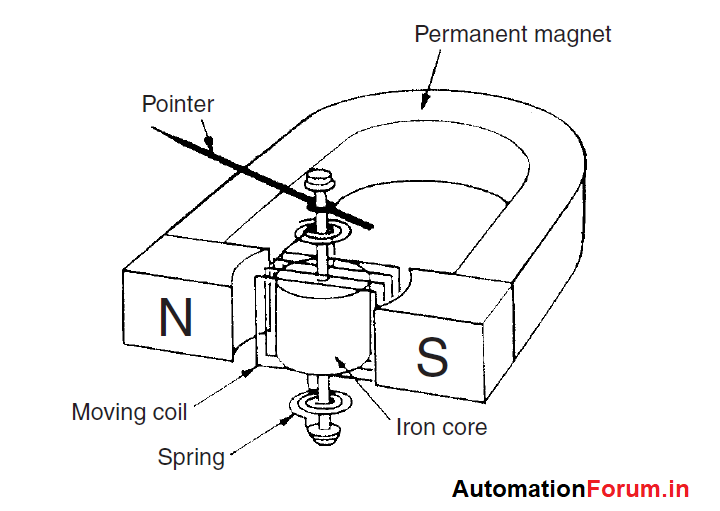 It consists of a rectangular coil wound round a soft iron core that is suspended in the field of a permanent magnet. The signal being measured is applied to the coil and this produces a radial magnetic field. Interaction between this induced field and the field produced by the permanent magnet causes a torque, which results in rotation of the coil.

As the basic instrument operates at low current levels of one milliamp or so, it is only suitable for measuring voltages up to around 2 volts. If there is a requirement to measure higher voltages, the measuring range of the instrument can be increased by placing a resistance in series with the coil, such that only a known proportion of the applied voltage is measured by the meter. In this situation the added resistance is known as a shunting resistor.

The moving-iron meter can measure a.c. signals at frequencies up to 125 Hz. It is the cheapest form of meter available and, consequently, this type of meter is also commonly used for measuring voltage signals. The signal to be measured is applied to a stationary coil, and the associated field produced is often amplified by the presence of an iron structure associated with the fixed coil. The moving element in the instrument consists of an iron vane that is suspended within the field of the fixed coil. When the fixed coil is excited, the iron vane turns in a direction that increases the flux through it. 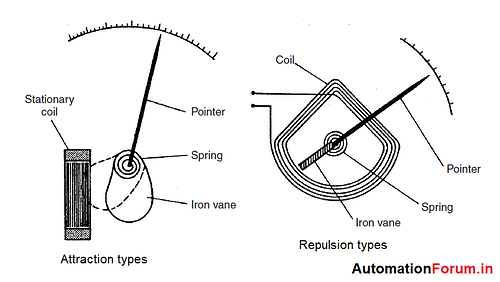 The instrument can typically measure voltages in the range of 0 to 30 volts. However, it can be modified to measure higher voltages by placing a resistance in series with it, as in the case of moving coil meters.

Electrodynamic meters (or dynamometers) can measure both d.c. signals and a.c. signals up to a frequency of 2 kHz. The instrument has a moving circular coil that is mounted in the magnetic field produced by two separately wound, series-connected, circular stator coils. The torque is dependent upon the mutual inductance between the coils. 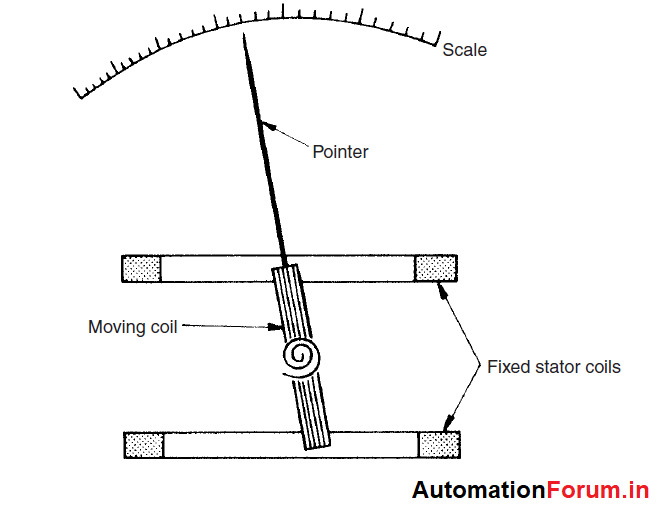 When used as an ammeter, the measured current is applied to both coils. The torque is thus proportional to current2. If the measured current is a.c., the meter is unable to follow the alternating torque values and it displays instead the mean value of current2. By suitable drawing of the scale, the position of the pointer shows the squared root of this value, i.e. the r.m.s. current.

When used for voltage measurement, the instrument can typically measure voltages in the range of 0 to 30 volts. However, it can be modified to measure higher voltages by placing a resistance in series with it, as in the case of moving-coil and moving-iron meters