ADVANTAGES AND WORKING OF THE STATIC INDUCTION THYRISTOR

This is a device which is capable of conducting large current with a low forward voltage and it can turn-off very fast, it is a self-controlled on-off device. A thyristor is a four-layered pnpn device which has three electrodes, the static induction thyristor it belongs to the static induction device family and it is a high power, high-frequency semiconductor device. It is a p+nn+ diode which has a buried P+ grid like gate structure 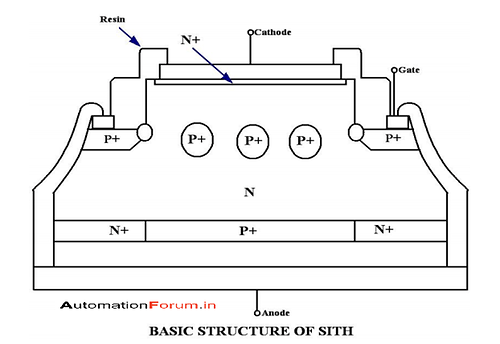 The static induction thyristor had been developed in recent years normally it is an on-state device if the gate voltage is zero and the anode is positive it acts as a diode and the current will flow freely. When the PN junction is forward biased it will cause the injection of the hole to the N region and its conductivity would be modulated if the gate is reverse biased respect to cathode the depletion layer blocks the anode current and by this, the device gets off

The depletion region will be filled with carries when a positive voltage pulse is applied to the gates, and the device would be in on-state during the turn on-phase it will act as a pin diode and the turn on-process transition time is dominated by the rate of carrier injection time 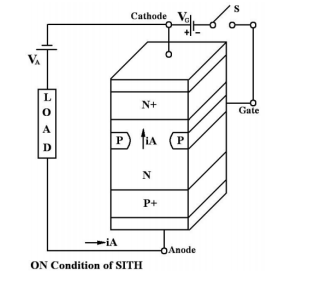 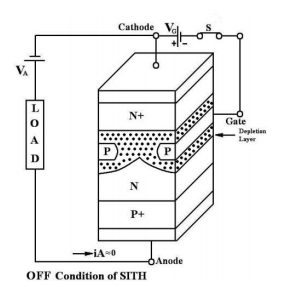 Mostly it is in on-state gate electrodes need to be negatively biased, and the negative biased voltage to the gate forms a low conductive region around the gates and then the thyristor holds off-state

ADVANTAGES • It has high immunity for electromagnetic noise • It can handle rapid voltage or current change • It can obtain a higher breakdown voltage than FET • Low noise • High audio frequency power capability • It can be used in energy accelerator, current source inverter, and high-frequency power conversion