6 Differences between Anode and Cathode

Electrolysis is the process of passing an electric current through a substance to cause a chemical change. A chemical change occurs when a substance loses or gains an electron (oxidation or reduction). The procedure is carried out in an electrolytic cell, which is a device comprised of positive and negative electrodes held apart and immersed in a solution containing positively and negatively charged ions. The substance to be transformed could be the electrode, the solution, or it could be dissolved in the solution. Electric current (i.e., electrons) enters the system through the negatively charged electrode (cathode); solution components travel to this electrode, combine with the electrons, and are transformed (reduced). The end result could be neutral elements or new molecules. 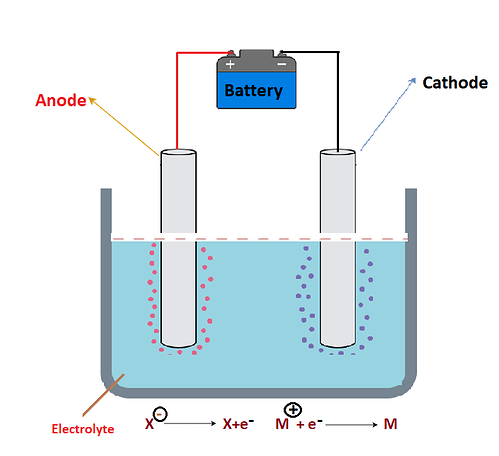 Components of the solution also travel to the opposite electrode (anode), where they give up their electrons and are transformed (oxidized) to neutral elements or new molecules. If the substance to be transformed is an electrode, the reaction is frequently one in which the electrode dissolves by releasing electrons.

An electrode is an electrical conductor that makes contact with a circuit’s non-metallic circuit parts, such as an electrolyte, semiconductor, or vacuum. This is also known as an anode or cathode in an electrochemical cell. The anode is an electrode where electrons leave the cell and oxidation occurs. Electrons enter the cell through the cathode, where they undergo a reduction process.

Electrodes are classified into two categories. They are

It is an electrode from which a polarised electrical device’s current flows. The mnemonic Cathode Current Departs can help you remember this. A conventional current indicates the direction of positive charge movement. Electrons are electrically charged negatively. As a result, the movement of electrons is diametrically opposed to the flow of current.

How does cathode work?

A cathode is essentially there to receive electrons from the anode. Both the anode and cathode are immersed in an electrolyte solution, and electricity flows from the negative to positive parts of your battery via the conductor. In a nutshell, this is how a battery produces electricity.

What are the materials good for cathode?

Directly heated cathode: In this case, the filament serves as the cathode and directly emits electrons.

Indirectly heated cathode: The filament is not the cathode in this type of cathode; rather, it heats the cathode, which subsequently produces electrons.

An Anode is a highly polarised electrode through which electric current flows into a device. Typically, the direction of the current is always the inverse of the flow of electrons.

As an example, electrons travel from a positive charge, or anode, into an electrical circuit. ACID, which stands for “anode: current into the device,” is a popular mnemonic for defining an anode.

How does an Anode work?

An anode is a metal that oxidizes, such as zinc or lithium, and thus loses electrons. It floats in an electrolyte solvent and slowly deteriorates as electrons flow along a conductor to the cathode.

The conductor (whether a metal wire or a tube) is how we access the electricity produced by the anode and, ultimately, how a battery powers our devices. The battery will die once the anode has completely eroded (or lost charge).

What are the materials good for Anode?

Anodes are classified into several types:

Representation of Cathode and Anode in batteries

Cells are made up of three essential components.

The anode is the negative or reducing electrode that releases electrons to the external circuit and oxidizes during an electrochemical reaction.

The Cathode is the positive or oxidizing electrode that takes electrons from the external circuit and reduces them during the electrochemical reaction. 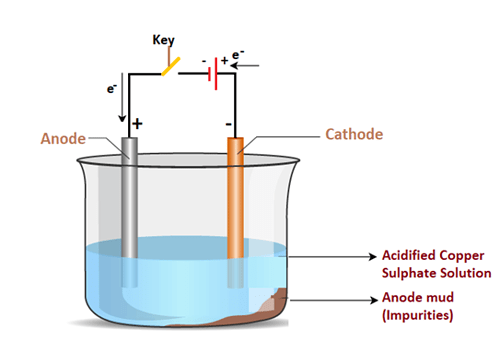 The electrolyte is the medium that allows ions to move between the cathode and anode of a cell. Electrolytes are frequently conceived of as liquids, such as water or other solvents, containing dissolved salts, acids, or alkalis necessary for ionic conduction. However, many batteries, including standard (AA/AAA/D) batteries, contain solid electrolytes that act as ionic conductors at room temperature.

Application of Anode and Cathode in industries

Applications of electrolysis are

1. Does Oxidation occur on Cathode and Anode?

2. What are the materials used for making Cathode and Anode?

3. Is LED Cathode positive or negative?

4. Are cations positive or negative?

A cation is a positively charged ion or atom that has lost one of its electrons.