5- Best Logic gate simulators for android and their features 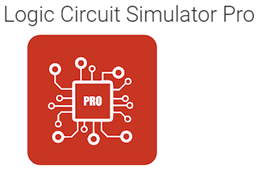 ▌ Logic Circuit Simulator PRO provides you the field to design you own digital circuit. ▌ Do you want to understand how electronics works? The application helps you learn the basics of electronics. ▌ Create amazing logic circuits with all the provided logic elements. ▌ Use variety of elements to ★ evolve ★ experiment and ★ learn. ★ The simulator makes designing COMBINATIONAL LOGIC CIRCUIT quick and easy by its intuitive interface and a lot of options to explore. ★ Educational - the applica... 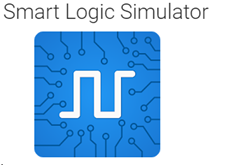 By using this app we can create many logic circuits that consist of logic gates, flip-flops, and hardware sensors of our smartphone. In this app, we can see different varieties of inputs and outputs. This app has components like AND gate, buffer gate, NAND gate, NOR gate, NOT gate, OR gate, XOR gate, XNOR gate, and it also has many sensors and other electronic components so it will be useful to make a circuit.

Create amazing logic circuits consisting of logic gates, flip-flops and hardware sensors of your smartphone. There is a variety of different input and outputs, except simple ones like on screen bulb you can use the physical flashlight or vibration engine. There are also different sensors like proximity sensor, light sensor and much more. All of that gives you an opportunity to build the circuits that can, for example, turn the flashlight on when there is dark in the room. Smart Logic Simulator ...

Select gates from the dropdown Investigate the behaviour of AND, OR, NOT, NAND, NOR and XOR gates and click button. Click the on\off switch and see what happens. This is the easiest way to understand the basic... 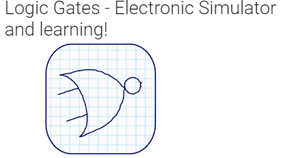 Now without ads! Simulate, play and learn logic gates! Learn simple logic gates: AND, OR, NOT, NAND, NOR, XOR and XNOR and a lot more electronic devices. This game contains lots of levels, starting with easy gates, which will allow player to learn by playing. With in-game circuit builder you can create your own electronic circuits and test your skills...

Digital Logic Circuit simulation and schematics. Build and simulate Digital circuits right in your hand. Build logic circuits with logic gates and other components then simulate. its extremely simple and easy to use. take no time to learn how to use it, suitable for students and teachers who's learning how digital logic circuit works. Logic Gate Simulator contains features : - Logic gates (AND,OR,NAND,NOT,NOR,XOR,XNOR) - Buttons (Toggle Switch,Push Button) - Lamps (Red,Green,Blue),7 Segment...