What is universal monitor?

The motor which can be operated on ac as well as dc supply is called as universal motor.

These are small HP motors

What is the meaning of compensation?

The rotating force developed by a motor depends on the flux of field and armature.

Field flux may be less due to field winding reactance. So in order to achieve the required torque,the armature flux is increased.

Thus armature is made in larger in size.

To neutralize the armature reaction,additional winding called compensating winding is embedded in series with the armature winding.

Construction of uncompensated universal motor- Field winding which is a stationary winding,produces flux. Armature is current carrying conductor which cuts the flux produced by field winding and torque gets produced.

Armature is similar to the DC motor armature. 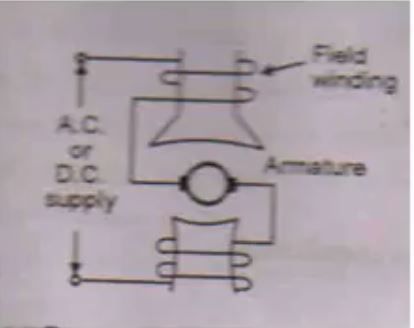