Trunking is a technique used in data transmission systems to offer numerous users network access by sharing multiple lines or frequencies. The system, as the name implies, is similar to a tree with a single trunk and many branches. Trunking is a typical technique in VHF radio and telecommunication systems. 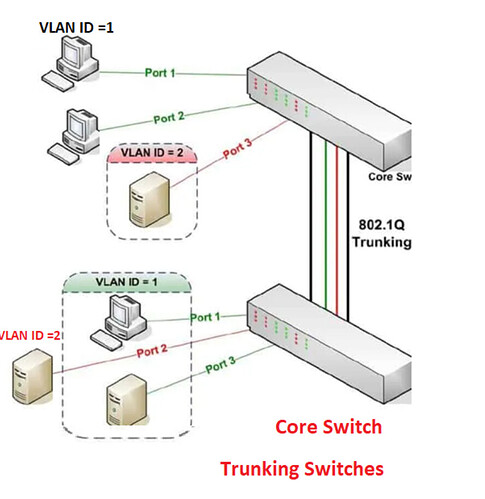 Trunking is also defined as a network that handles many signals at the same time. Audio, video, control signals, or images can all be sent via trunking.

The Trunking technique is used in telecommunication networks all over the world. Trunking minimizes the size of a telecommunications network while increasing capacity. Trunking is also employed in VHF radio, which is used by police and control centers.

Trunking is a type of inverse multiplexing that is commonly used to combine many wide-area networks (WAN) connections into a single connection. Trunking was first employed in the switched local area network (LAN) environment to alleviate congestion in switch-to-switch connections. Data speeds of 300 or 400 Mbps between Fast Ethernet switches can be achieved by aggregating many 100-Mbps lines between the switches to meet network backbone traffic. In a full-duplex setup, this translates to rates of 600 or 800 Mbps, which compete with more expensive Gigabit Ethernet technology and breathes fresh life into outdated switches.

Trunking can also be used in switch-to-server connections to aggregate multiple connections to a single server. This type of trunking can be implemented entirely in software or as a hybrid of hardware and software. Trunking software, for example, implemented on numerous network interface cards (NICs) in the server, automatically performs load balancing across the many server interfaces and can remove an interface from the trunking group if the interface fails. This increases the bandwidth between the server and the switch while also ensuring fault-tolerant functioning.

Trunking is mainly divided into two types. They are

Symmetrical Trunking: Allows any port in a trunking group to send packets to any other port in the trunking group. Full-duplex connections are thus supported across all group links. In a trunked group of four interfaces and one switch, for example, a server can transmit and receive data at 400 Mbps.

Asymmetrical Trunking: Allows every port in a trunking group to send packets but only one port (the switch port) to receive packets. The server can send data at 400 Mbps but only receive data at 100 Mbps.

VTP is an abbreviation for VLAN (Virtual Local Area Network) Trunking Protocol. This is a proprietary connection protocol developed by Cisco that is used to exchange VLAN configuration information. VTP is utilized to share this information and enable distribution among multiple switches. Each VLAN has a unique identification number and name.

What role does trunking play in VLAN configuration?

Trunking can aid in VLAN configuration by allowing a port to handle incoming traffic more efficiently. Traffic can be divided into logical patterns and directed through the port using the VLAN configuration. Because numerous users may connect or construct a link to the VLAN setup, the idea of trunking is critical. Trunking serves as the foundation for how traffic arrives, whereas VLAN aids in traffic routing and organization. Tags are used by the trunking VLAN port to trace incoming traffic as it moves via subnets and switches.

Trunking is only capable of establishing point-to-point connections between two switches or between a switch and a server. You can, however, employ 3Com’s Multipoint Link Aggregation (MPLA) technology to combine physical lines connected to separate switches into a single logical link. Thus, MPLA provides multipath trunking between many switches and servers, allowing network managers to configure their gear for the best traffic serving. Other firms are developing multipath trunking systems, but no standards have arisen as of yet.

Although the theoretical speed for quadruple-trunked full-duplex Fast Ethernet connections is 800 Mbps, due to traffic overhead, the greatest practical rate is around 560 Mbps.

To adequately support trunked connections, switches must be intelligent. Before attempting to deploy trunking on your network, review the documentation for your switch.

What are the types of trunking networks?

There are three types of trunking networks. They are

Trunking systems are frequently used in data networks to increase capacity and generate efficient networks. A trunking system, for example, may collaborate with a VLAN to connect various network switches, subnets, and ports. The trunking system may then manage incoming data logically by splitting it into logical groupings. The VLAN and access trunking arrangement allows for higher capacity and a reduction in data transfer delay.

Landlines were the first to use trunking in telephone systems. Trunking now permits the linking of network nodes, allowing phone networks to manage massive amounts of data flow at the same time. VoIP trunking is now used in phone networks, allowing a phone provider to convert human sounds into data.