What is reactive power

Why do we need reactive power in a power system

What is the need for reactive power compensation

How to compensate reactive power

Shunt compensation of the reactive power could be done either at load, substation or transmission level the compensation must be provided close to the consumption to avoid the distribution in other parts. This device would be connected in parallel with the transmission line and it would be connected in the middle of the transmission line. It can be provided either by a current source, voltage source, or a capacitor. Overvoltages in reactors can be reduced by this type of compensation and the voltage level can be maintained in the capacitor by using this. 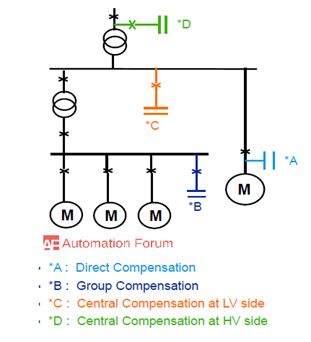 These benefits are created by using the shunt capacitor to adjust the reactive power.

If a device is connected in series with the transmission line, then it is called a series compensator and they can be connected anywhere in the line. This type has two operating modes capacitive mode and inductive mode.

This device is used to improve the PF of the electrical system and it is installed at the receiving end of the line. This will supply KVAR to the system and reduces the current. So the losses are reduced and better efficiency can be achieved. Thus more power can be delivered to the load and PF can be improved.

What are the limitations of reactive power

Wow, this is very informative. I’ve learned a lot here!