The Hot Standby Router Protocol (HSRP) is a CISCO proprietary protocol that offers local subnet redundancy. In HSRP, the illusion of a virtual router is created by two or more routers.

With HSRP, you can set up two or more routers as backup routers and just one router as active at once. A single MAC address and IP address are shared by all the routers in a single HSRP group and serve as the default gateway to the local network. The traffic must be forwarded by the Active router. If the current router fails, the standby router assumes all duties and forwards the traffic.

The Hot Standby Router Protocol does this by acting as a Gateway of numerous routing alternatives using a Virtual IP address and a MAC address. The traffic is always routed to the Virtual IP address, which serves as the Virtual Gateway. As a result, the traffic flow is unaffected by a device. This eliminates single point of failure for networks.

By the way, the HSRP Group numbers are mentioned at the start of the configuration after the “standby” keyword. An interface can have numerous Hot Standby Router Protocol groups. 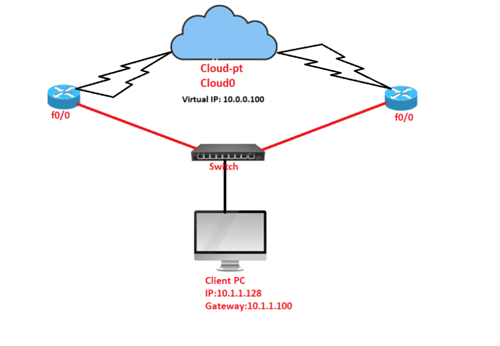 If the original active router returns, we can reduce the priority of the backup router, making it the standby router once more.

Virtual IP: An IP address from the local subnet is assigned to all local hosts in the network as the default gateway.

Greetings (Hello) messages: Active and standby routers exchange messages on a regular basis. These messages are exchanged every 3 seconds and inform the router’s status.

Hold down the timer: The default value is 10 seconds, which is nearly three times the value of the hello message. This timer notifies us about the router and how long the standby router will wait for the hello message if it is not received on time.

Please keep in mind that the router with the highest priority will become the active router.

Preempt: This is a state in which the standby router takes over as the active router.

HSRP Groups are used by the Hot Standby Router Protocol. There are different routers with varied roles for each group. These are the roles:

Standby Router: The Standby Router serves as the Active Router’s backup. When the active router fails, this router becomes active, and all traffic is routed through it.

There are two variants of the Hot Standby Router Protocol (HSRP):