What is a separator and what does it do? How to select oil separator?

A separator is used in the oil field, it is basically a pressure vessel that can separate the liquid from the well into oil and gas and the water content in the oil is separated or reduced by using a separator. Separators are used as the major components in petroleum production and in this, the separator will separate the fluids into oil, gas, and liquid. Separators are widely used in many petrochemical industries, oil refineries, power plants, etc. A separator is used to separate a lot of things such as gas, heavy and light oil, it is also used to separate oil from water, mud, or solid particles. The separator plays a major role in chemical industries for the separation of different chemicals.

What are the factors that should be considered for separation?

Why do we need separators?

Equipment such as pumps and compressors won’t handle gas-liquid mixtures, a pump needs gas-free liquid and a compressor would need liquid-free gas. The product specification would be limited because of the impurity such as the water content in oil. There will be inaccuracy for measurement devices if there is a presence of other phases.

What are the functions of a separator?

What are the components of a separator?

In this section, large liquid particles are removed such as slugs, so that the gas turbulence can be reduced and the liquid particles can be separated and this process is done by changing the velocity and flow direction.

In this section, the gravity settling of the liquid from gas is done after reducing the stream velocity and this process is completely dependent on particle size, gas and liquid properties, and the gas turbulence.

In this section the impurities are removed, this section doesn’t have stream turbulence and the solid particles in the fluid such as mud, would settle on the bottom of the separator and it would be removed. The separated liquid would flow out from the separator.

This section is to remove the small droplets of liquid in the last step of the separation.

What are the types of separators and how does a separator work?

The working of the separator is based on the principle that the fluid components have different densities and by this, we can divide the fluid as gas, oil, and water. Solid particles will be settled on the bottom of the separator and the oil can be separated.

Separators are divided according to their vessel configurations they are

This type of separator is used in oil wells that have high gas to oil ratios, it is commonly used for multiphase separation and for the liquid to liquid separation. This type is used in a place where headroom is less, it is also used if impurities or solid particles from the well fluid is high. This type of separator has a good wall thickness which is suited for its large diameter. 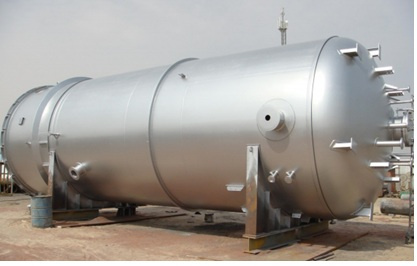 This type of separator is used if we need to separate a huge amount of slug from the liquid. This separator vessel volume is small and these separators are used in oil wells that have a very low gas-oil ratio.

How to troubleshoot oil separator?

How to select oil separator?

What are the applications of separators?