Optocouplers also known by photocoupler are made of LEDs, photodiodes or phototransistors linking circuits by a short optical path but isolating them electrically hence the name optoisolators .

The photocouplers or optocouplers are typically contained in a single package, often about the size of an integrated circuit, although there is a large degree of variation according to the intended application.

components of a optocoupler

Light emitter : a light emitting diode that takes the incoming signal and converting it into a light signal. Used in the input side of the circuit.

Light detector : The light detector which can be a photodiode to a phototransistor, photodarlington, etc. detects the light from the emitter and converting it into an electrical signal.

Other components of The opto-coupler are series resistor for the LED ,output amplifier etc.

Both detector and emitter comes in same packages due to mechanical arrangements constraints but when needed separate components are utilised for specific applications.

Stictly, there are differences between the terms optoisolator and optocoupler. The distinguishing factor between the opto-coupler and opto-isolator is in the voltage difference expected between the input and output:

Opto-coupler: The opto-coupler is generally thought of as being used to transmit analogue of digital information between circuits while maintaining electrical isolation at potentials up to 5 000 volts.

Opto-isolator: The opto-isolator is generally used in power systems and used to transmit analogue or digital information between circuits where the potential difference is above 5 000 volts.

The symbol is a LED, which is the light emitter and the relevant device that acts as the receiver often a phototransistor or photodarlington, or light sensitive diacs, etc may also be used. 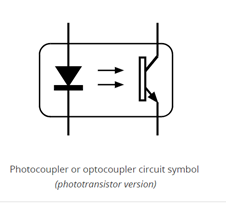 Current transfer ratio, CTR : The current transfer ratio of an optocoupler is the ratio of the current that flows in the output device divided by the current on the input device. The CTR will differ depending on the opto-coupler used in the output. Outputs with photodarlingtons will have CTR valus higher than ordinary phototransistors. Values may be anywhere between 10% and 2000% - 5000%. The CTR have a tendency to to vary with the input current level. Although it will vary according to the device usually it peaks for input current levels around 10mA falling either side of this value.

Bandwidth : The maximum data rates for which an opto-coupler can be used its bandwidth is necessary. For opto-couplers using phototransistors it is around 250 kHz, and for those using photodarlingtons it may be a tenth of this. Typically the lower the CTR, the faster the rise and fall times

Input current : This is the current required for the input transmitter device - LED. The value is used to calculate the series resistor used to limit the current.

Note: The devices should not operate close to their maximum ratings. 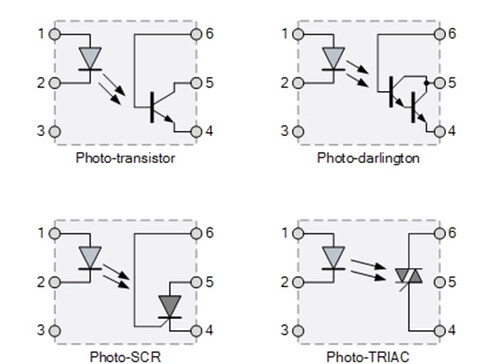